From the seriously wacky mind of Mike Nawrocki, the co-creator of VeggieTales (and the voice of Larry the Cucumber), comes a brand-new animated series based on his faith-based, laugh-out-loud chapter book series for kids from Tyndale Kids.

The Dead Sea Squirrels brings to life—literally—the tales of Merle and Pearl, a pair of squirrels who are old enough to have heard Jesus’ teachings in real time. Yet they are vibrant enough—thanks to their new pal Michael—to go on hilarious adventures in America with a group of fifth-grade friends. Hijinks ensue as this salty couple reanimate and take their new friends on adventures full of action, humor, music, and character building.

Get The Latest Updates

Download these files and upload them to your social media channels 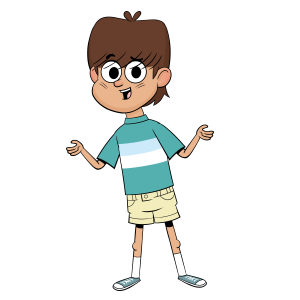 Michael Gomez is an adventurous and active 10-year-old boy. He is kind hearted but often acts before he thinks. He’s friendly and talkative, and blissfully unaware that most of his classmates think he’s a bit geeky. Michael is super excited to be in fifth grade, which, in his mind, makes him “grade school royalty!” 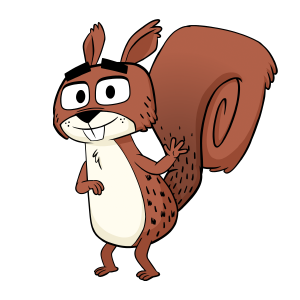 Merle Squirrel may be thousands of years old, but he never really grew up. He has endless enthusiasm for anything new and interesting- especially this strange modern world he finds himself in. He marvels at the self-refilling bowl of fresh drinking water (otherwise known as a toilet) and supplements his regular diet of tree nuts with what he believes might be the world’s most perfect food: chicken nuggets. He’s old enough to know better, but often finds it hard to do better. Good thing he’s got his wife, Pearl, to help him make wise choices. 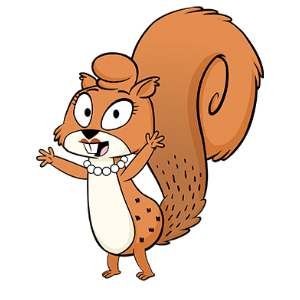 Pearl Squirrel is wise beyond her many, many, many years, with enough common sense for both her and Merle. When Michael’s in a bind, she loves to share a lesson or a bit of wisdom from the Bible events she witnessed in her youth. Pearl’s biggest quirk is that she is a nut hoarder. Having come from a world where food is scarce, her instinct is to grab whatever she can. The abundance and variety of nuts in present-day Tennessee can lead to distraction and storage issues. 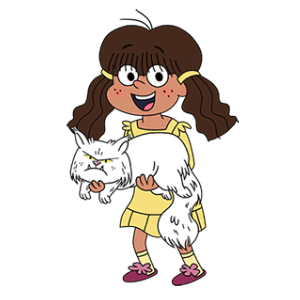 Jane Gomez is Michael’s little sister. She’s super adorable but delights in getting her brother busted so she can be known as the good child. She thinks Merle and Pearl are the cutest things she has seen in her entire life (next to Mr. Nemesis) and is fond of dressing them up in her doll clothes.

Mr. Nemesis is the Gomez family cat who becomes Merle and Pearl’s true nemesis. Jealous of the time and attention given to the squirrels by his family, Mr. Nemesis is continuously coming up with brilliant and creative ways to get rid of them. He hides his ability to talk from the family, but not the squirrels. 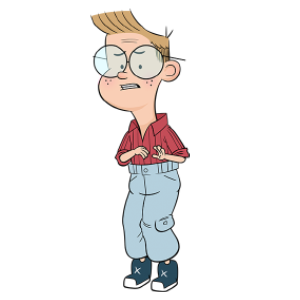 Justin is Michael’s best friend. Justin is quieter and has better judgement than Michael, and he is super smart. He’s a rule follower and is obsessed with being on time. He’ll usually give in to what Michael wants to do after warning him of the likely consequences. 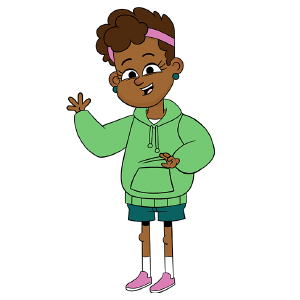 Sadie is Michael and Justin’s other best friend. She enjoys video games and bowling just as much as cheerleading and pajama parties. She gets mad respect from her classmates as the only kid at Walnut Creek Elementary who’s not afraid of school bully Edgar. Though Sadie’s in a different homeroom than her two best friends, the three always sit together at lunch and hang out after class. 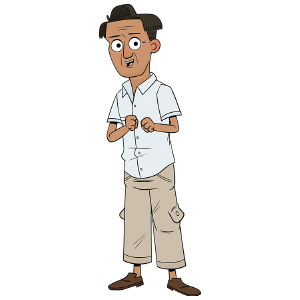 Dr. Gomez, a professor of anthropology, is not thrilled when he finds out that his son, Michael, smuggled two ancient squirrels home from their summer trip to the Dead Sea, but he ends up seeing great value in having them around as original sources for his research. Dad loves his son’s adventurous spirit but wishes Michael would look (or at least peek) before leaps.

Mrs. Gomez teaches part-time at her daughter’s preschool and is a full-time mom to Michael and Jane. She feels sorry for the fish-out-of-water squirrels and looks for ways to help them feel at-home, including constructing and decorating an over-the-top hamster mansion for Merle and Pearl in Michael’s room. She also can’t help but call Michael by her favorite (and his least favorite) nickname, Cookies. 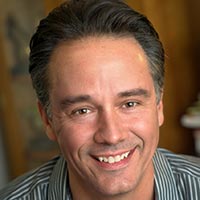 MIKE NAWROCKI
As co-creator of VeggieTales and the voice of the beloved Larry The Cucumber, Mike Nawrocki has been making entertaining and wholesome content for kids since 1993. He created, wrote and directed most of the extremely popular “Silly Songs with Larry” segments, and lent his screenwriting and directing talents to VeggieTales episodes as well as their movies JONAH AND THE PIRATES WHO DON'T DO ANYTHING. Mike also developed and wrote for 3-2-1 PENGUINS! and authored a number of VeggieTales Books and CD projects. Mike serves as Assistant Professor of Film and Animation at Lipscomb University and co-hosts the weekly podcast, “The Bible for Kids.” 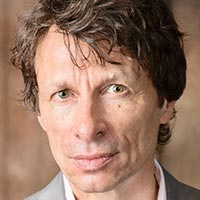 STEVE TAYLOR
Steve Taylor earned his “Renaissance Man” stripes (Prism Magazine) from a unique body of work as an artist and entrepreneur. As a recording artist he’s sold over one million albums and received two Grammy nominations. His resume as a music producer includes three gold-certified albums for the Newsboys and the platinum-certified Sixpence None The Richer, including their smash hit “Kiss Me.” Steve’s career as a filmmaker includes THE SECOND CHANCE and BLUE LIKE JAZZ. He serves as Director of the School of Theater and Cinematic Arts at Lipscomb University. 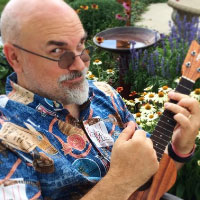 TIM HODGE
Tim Hodge has more than 30 years in the animation industry, including at Walt Disney where he worked on films including “The Lion King,” “Pocahontas, and “Mulan.” Tim moved to Big Idea Productions, where he wrote and directed for the award-winning series, VeggieTales. Tim’s contributions included voice-over acting, earning an Annie Award nomination for his role as Khalil in “Jonah.” Tim also was executive producer of Big Idea’s “3-2-1 Penguins!,” writing and directing some of the episodes and he directed three seasons of the Dreamworks TV/Netflix series “VeggieTales in the House.” Tim has also contributed to Cartoon Network’s “Tom & Jerry,” the feature film “Animal Crackers,” “Scooby Doo,” and “Dorothy and the Wizard of Oz.” Tim’s storyboarding and cartooning tutorials are available at creatureartteacher.com. 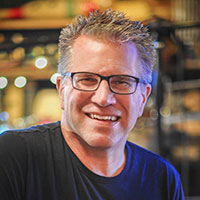 KURT HEINECKE
Kurt Heinecke has been a songwriter and composer for inspirational media for almost 30 years. After his career as a touring musician, music teacher, band director, and church music director, he met a pair of vegetables that took him on a journey as VeggieTales’ music director for more than 25 years. Kurt has garnered 7 Gospel Music Association Dove Awards for his VeggieTales production work. He has composed for other series including “3-2-1 Penguins!,” CBN’s “Superbook,” Andrew Peterson’s “Wingfeather Saga,” and Randall Goodgame’s “Slugs and Bugs.” Kurt has also composed or performed for projects with Disney, Blizzard Entertainment, Sesame Workshop, Museum of the Bible, “Animal Crackers” movie, and “Is Genesis History” documentary. 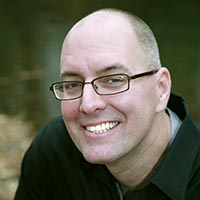 TOM BANCROFT
Tom’s three decades of experience began at Walt Disney Feature Animation, where he was an animator on classics like BEAUTY AND THE BEAST, THE LION KING, and ALADDIN. He created Mushu The Dragon for Disney’s MULAN. Tom was also Supervising Director/Co-creator for a VeggieTales DVD series. His popular character design instruction books have become required textbooks at art schools around the world. Tom is the founder and Artist-in-Residence of the burgeoning Animation program at Lipscomb University, where he mentors over one hundred student animators. 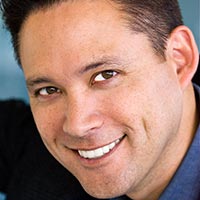 SHUN LEE FONG
Shun Lee is a filmmaker, actor, writer, and creative consultant in Los Angeles. He earned a Juris Doctorate at the University of Iowa and is the CEO and Creative Principal of Genuine Productions, LLC, a media & entertainment production company with an emphasis on both original and client-based film, new media, publishing, and creative business strategies. He is also the President & Creative Director of The Greenhouse Arts & Media, a nonprofit creative arts organization that has worked with thousands of creative professionals. Shun Lee is also the author of The Saints & The Poets, a book of essays on a number of topics, including the intersection of creativity, the arts, faith, and leadership. 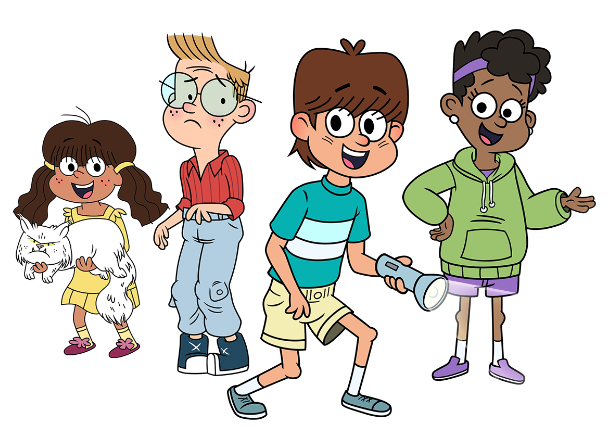 Are you ready to join Team Squirrels?! To get the latest news about THE DEAD SEA SQUIRRELS emailed or texted straight to you, please fill out the information below. And when you sign up, you’ll receive an exclusive sneak peek of a scene from the pilot episode! And be sure to follow us on socials!